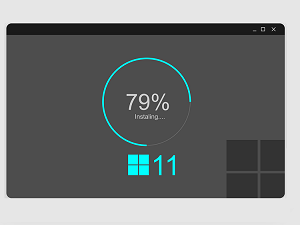 According to researchers at HP, there’s a new threat to worry about. Hackers have recently begun disguising malware as Windows 11 upgrades and are using them to target Windows 10 users who are anxious to move to Microsoft’s latest OS. This new campaign begins like many others with an email informing the recipient that if they click the link provided in the email, they’ll be taken to Microsoft’s website where they can get a free copy of Windows 11.

Victims who click the link will be taken to a site that is a very good and convincing replica of the legitimate Microsoft website. Only a careful inspection of the URL will reveal that something is amiss and most users don’t pay much attention to URLs so this is quite likely to go unnoticed.

Once on the site, the victim will be prompted to download the file that promises to be Windows 11. It is nearly 800 MB in size so at that point it still seems legitimate.

Unfortunately, if the victim runs the downloaded file they seal their fate as it will install malware on their system.

At present, the most common malware deployed via this campaign is RedLine Stealer which steals stored passwords, cookies, saved payment card information, and cryptocurrency wallet information. So if it lands on your system or finds its way into your company’s network it can deal significant damage with long lasting consequences.

The worst part of all this is that Microsoft has unintentionally made the issue worse than it needs to be. There are a great many Windows 10 users who cannot get Windows 11 from official distribution channels due to hardware incompatibilities. That has created an enormous opportunity for hackers around the world and they are wasting no time exploiting that opportunity.